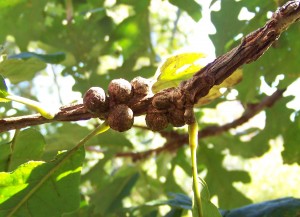 What do you do when your Tu Bishvat trip to plant trees is cancelled because there is a wind storm, rain, and freezing weather in Israel – as is happening as I write this? Hundreds of trips were canceled today. But the Biblical Landscape Park called Neot Kedumim has a solution. They have a resident scribe, Zachariya Ben Moshe, who sits indoors and explains what plants go into making of a Torah scroll. Neot Kedumim’s website has an English option

You can watch and listen to Zechariya as he explains what plants that they grow are used to make kosher scribal ink.

Although he speaks in Hebrew, watching him in action you can understand which are the ingredients he is describing. Another option to watch Zechariya is on their facebook page.

First he shows how he pulverizes the dry rind of a pomegranate and adds a gummy, glistening resin from an almond tree. He makes a powder from the gall nut of an oak tree, adds hyssop (Biblical azov), some charcoal soot together with honey, some vitriol (think of a vitriolic temper, chemically it is sulfuric acid, Talmudically it is kankantom, see Shabbat 104b). He tops this off with some copper rust filings. The mixture is boiled until it thickens into kosher ink. Zachariya then shows us the quill he made from a common reed grown in Neot Kedumin

As for the parchment, the gall nuts that go into the ink are also used to make klaf. Gall nuts are marble-like growths on oak trees. They contain tanins (think tanning leather). A gall nut is called afatz in Hebrew.

For more than you ever want to know about these bacteria-caused growths that attack oaks you can watch this video. You can see the gall nuts on the photo above accompanying this post, where brown marble-shaped balls cluster on an oak branch.

For those shut in this Tu Bishvat because of snow on the Eastern seaboard or rain in Eretz Israel, you can take a virtual tour in English of all the flora and archaeological sites in Neot KEdumim I by clicking on the virtual tour option.

If you are here in Israel you can go watch Zechariya write out your name on parchment with his homemade ink and quill in Neot Kedumim, near Modiin (on the way to Kiryat Sefer, 10 minutes from Ben-Gurion airport). Neot Kedumim is not to be confused at all with the community of Kedumim in the Shomron. One of the features of this park, which has hundreds of species of plants & trees mentioned in the Bible, Talmud, and midrash, is that it is a neutral ground for almost all sectors of the population – secular, religious, haredi, non-Jewish. It is closed on Shabbat. I visited Neot Kedumim recently with a Satmar friend from Monsey, and Adrian Manteka, a madricha there, arranged for us an English-speaking guide, Yair Lendler. He was gracious and informative as he showed us around and explained how the Park’s cisterns, olive presses, and grape vats work.

I had intended to write a critical posting for Tu Bishvat about how secular Zionists inflated a minor day on the Jewish calendar, 15th of Shvat, into a holiday which is one more substitute for Torah and mitzvot. But my experience was so upbeat at Neot Kedumim that I decided to write something positive and inclusive…. for a change. You might even say, to use a florid metaphor in keeping with Tu Bishvat, if this posting is a bit too rosey. So be it.