Defending the Traditional Beis Medrash Curriculum – at YU and Everywhere Else 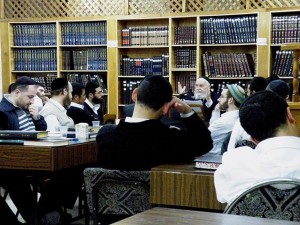 Why can’t a yeshiva education be more utilitarian? After years of learning, with intense focus on abstract conceptualization and only minor focus on practical Halacha, talmidim emerge with apparently quite little to show. They have not mastered Hashkafa; they have not mastered Halacha; they seem to not have mastered much of anything. As a result, they cannot put their learning into practice and are unable to articulate cogent responses to the challenges of the day. Accordingly, it would be of far greater value to spend the bulk of one’s yeshiva experience learning Moed and Halacha L’Maaseh.

This is the message with which I walked away after reading Netanel Paley’s Why The Mazer Yeshiva Program Can’t Afford to Be Lakewood, published in the new edition of The Commentator. Although Mr. Paley directs his points to the YU beis medrash curriculum, his overall argument (absent his discussion of Modern Orthodoxy) has been expressed by others with regard to yeshivos in general. Hence this response on Cross-Currents rather than in a more local venue.

Unlike some critics of the standard yeshiva system, Mr. Paley is a ben Torah whose heart is in the right place. He poses his challenge with sincerity, based on his sense that the principal undergraduate beis medrash program at Yeshiva University should be modified so as to prepare talmidim for more concrete objectives and practical aims:

Ask any MYP student and you might hear something like this: the yeshiva adheres to the time-honored tradition of learning so-called “yeshivish” masekhtot (tractates) of Talmud such as Sanhedrin because of their supposed complexity and intellectual sophistication over halakhically practical tractates such as Berakhot. On the surface, this is merely an homage to the Eastern European yeshiva system and an unconscious choice for a respected yeshiva that has to keep up its reputation as an elite Talmudic academy. Yet a simple assessment of this seemingly inconsequential decision reveals how remarkably inefficient it is. Consider the following: Most MYP students do not study for semikha, rendering their years in MYP perhaps their last chance to devote a significant amount of time to studying halakha in depth. Many will graduate YU having never properly learned the myriad laws of Shabbat and Kashrut. And while Mishnah Berurah is one of the most important halakhic works of the last century, it cannot serve as a substitute for in-depth halakha study because of its condensed format…

The largest Torah study program in the flagship institution of Modern Orthodoxy needs to be more than a traditional yeshiva. The majority of MYP’s graduates will enter the workforce rather than the rabbinate, creating a new generation of laymen who will help shape their Modern Orthodox communities. It has always been YU’s mission, if sometimes unstated, to play a role in weaving the halakhic and ideological fabric of those communities; the Center for the Jewish Future, for example, provides YU-sponsored pastoral and educational resources to Modern Orthodox congregations across North America. With the ever-increasing influence and broader acceptance of Open Orthodoxy, however, YU’s grip on these shuls and schools is beginning to loosen. While the halakhic and ideological lines between Modern/Centrist Orthodoxy and Open Orthodoxy are clear to those in RIETS and those associated with it and its faculty, they are rather hazy to communities who are not, particularly outside the New York area. Especially in new congregations, RIETS graduates are competing with Yeshivat Chovevei Torah graduates for pulpits. If YU wants to maintain its current influence to chart the future of Modern Orthodoxy, then, it is essential that it make a conscious effort to imbue the new generation with its moderate Orthodox values. At present, that is not happening.

The unfortunate result is that less and less YU graduates and students, even those in MYP, understand these values. Take the concept of mesorah (tradition), for example, which was the most favored argument of many RIETS Roshei Yeshiva in their opposition to rabbinic ordination of women. I am completely confident that these Roshei Yeshiva, given the depth and breadth of their knowledge of Torah, can precisely define what mesorah means to them and how it plays a role in the halakhic process. I am much less confident that my fellow MYP students can do the same. In fact, I have discussed the meaning of the term with several of them, from different shiurim, and have yet to hear a satisfactory answer. Yes, there could be many different reasons for that. But regardless of the answer, it is quite probable that a new Torah curriculum, one less heavily focused on theoretical lomdus and more balanced by practical halakha, will leave MYP graduates with a deeper, more grounded knowledge base and a more thorough understanding of the halakhic process. This new curriculum, in turn, will prepare them to establish communities within the boundaries of YU’s Modern Orthodox ideology and allow them to defend those boundaries from questionable halakhic innovations.

I will be the first person to agree that yeshiva graduates must be equipped to meet the ideological challenges of the day. Ignorance is not an option. Yet the way to achieve the desired goal must be carefully considered.

A true sense of Mesorah, of what is acceptable on the hashkafic and meta-halachic plane, is to be acquired by immersion in Torah learning on the highest and most profound levels. The gedolim who propounded standards and guidelines for that which falls within the realm of Mesorah did not train for such by taking courses or attending shiurim in which it was explained why women cannot become rabbis, why compromising interfaith and interdenominational discourse is disallowed, or why church choirs should not perform in synagogues. The Torah luminaries who have taught us that these and other innovations contravene Mesorah (and/or Halacha in a technical sense) were able to define Mesorah and halachic nuance based on their deep grasp of Torah and their acute perception of the undercurrents and attitudes of the halachic system, as a result of being steeped in such for years on end. This deep immersion in analytical and abstract halachic thinking is the only way to become a master who has the gravitas to speak with authority to issues of Mesorah. (Please also see here. And please see here for elaboration on the concept of Mesorah.) Primary focus on practical Halacha, even with rigor and at advanced levels, will not precipitate this result.

(It is interesting that the curricula of top-tier law schools concentrate predominately on case law rather that on statutory law. Law students from Harvard, Yale, Columbia and the like are known for their lack of preparedness for the bar exam upon graduation, when contrasted with graduates of lower-tier law schools. The reason is that top-tier law schools assert that they seek to train their students primarily in thinking skills, disputation and conceptualization, eyeing the case law argumentation (the “shakla v’tarya“) rather than the actual applicable law (the “halacha l’maaseh“). It is believed that this will ultimately produce far superior jurists and will provide the necessary foundational grounding to cultivate bona fide legal authorities.)

However, there is another, more elemental issue at hand.

Our charge is to delve into the entirety of Torah – most of which is not currently “l’maaseh” (in practice). For a yeshiva curriculum to basically exclude 80% of the overall corpus of Torah She-b’al Peh (the Oral Law) in favor of more practical programming is not an option from the perspective of our mandate to embrace and deeply probe the totality of the Talmud.

There is an even more fundamental point that must be made – something so essential to what learning Torah is all about.

Torah learning in a normative sense must be lishmah – for the sake of the mitzvah to study the D’var Hashem, the Word of God. Whether this means study purely for the mitzvah of Talmud Torah (Torah Study) and nothing else, or whether it means study in order to come closer to the Divine by experiencing immersion in the waters of Torah, learning lishmah is what the yeshiva experience is all about. This is why the traditional “yeshiva machzor”, the rotation of masechtos (Talmud tractates), includes heavy focus on those areas of Halacha which are not currently practical, as that is where a great bulk of the most profound, abstract, conceptual and complex ideas are to be found, unearthed and articulated. The traditional beis medrash curriculum is a product of calculated thought, not of arcane or illogical, habit-driven practice.

While everyone has an obligation to learn practical Halacha and other parts of Torah, and everyone should spend time trying his best to work out the sugya (topic) independently, rather than his entire seder consisting of a rush through marei mekomos (sources) to prepare for shiur and his chazarah (review) consisting of a mere parroting of the shiur, the basic thrust of Torah learning at any yeshiva (and beyond!) must be the development of a penetrating depth (and some breadth) in Gemara and its commentaries. Such immersion in the Yam Ha-Talmud (Sea of Talmud) is at the heart of our tradition of Talmud Torah Lishmah and is the only way to truly become a meaningful link in the great Mesorah of Torah.