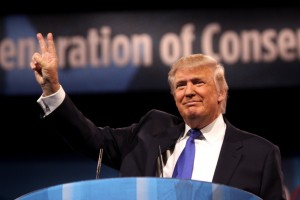 When the Obama White House and Dick Cheney agree on something, it’s worthy of note.

What united the two – along with a conga line of Democratic and Republican presidential candidates, members of Congress and world leaders – was Donald Trump’s latest gambit to garner attention. That would be the candidate’s announced desire to effect a “total and complete shutdown” of Muslims entering the United States until elected leaders can “figure out what… is going on.”

White House spokesman Josh Earnest said Mr. Trump’s position “disqualifies him from serving as president.” Mr. Cheney said it “goes against everything we stand for and believe in.” The others all echoed those sentiments.

Leaving aside, though, what America stands for, there is also what Israeli journalist Chemi Shalev noted, namely, that “ISIS dreams of an Islam-hating America that isolates its own Muslims; Trump is busy making their dreams come true.”

President Obama made that same point in his December 6 address to the nation.

He demanded that Muslim leaders “decisively and unequivocally reject the hateful ideology that groups like ISIL and Al Qaeda promote,” but also warned that “We cannot [let] this fight be defined as a war between America and Islam. That… is what groups like ISIL want.”

What’s more, there are more than a billion Muslims worldwide, and the vast majority of radical Islamists’ victims are Muslims. The average Muslim may not support Israel, but neither is he a murderer.

Had Mr. Trump just urged special scrutiny of visa applications from certain countries, it would not have raised very many eyebrows very high. But, of course, it’s eyebrows and outrage he’s after.

A more dignified and wise approach toward Muslims came from Homeland Security Secretary Jeh Johnson, in an address to a gathering at a Virginia mosque.

After speaking out against “the discrimination, vilification and isolation that American Muslims face in these challenging times,” he reminded his listeners that “terrorist organizations overseas have targeted your communities. They seek to pull your youth into the pit of violent extremism.” And he challenged the Muslim community to “Help us to help you stop this.”

Depressingly, though, instead of publicly exhorting their followers to seek out and uproot the germs of evil seeking to infect their communities, some American Muslim spokespeople chose instead to just kvetch.

“We would never ask any other faith community to stand up and condemn acts of violence committed by people within their groups,” complained one, activist Linda Sarsour.

Ms. Sarsour might consider that, were Presbyterians or Mormons regularly killing innocents in the name of their faiths and celebrating the carnage, they would surely draw similar attention to their co-religionists. There, too, condemning an entire religion for the acts of some of its evil actors would be wrong. But equally wrong would be reluctance on the part of the religions’ leaders to shout their condemnation of the evil from the rooftops and to call on their followers to be help root it out.

Instead, here, we have de rigueur, lackluster statements of disassociation from terrorist acts.

And, more depressing still, we have “moderate” sentiments like those of the male San Bernardino mass murderer’s father, who revealed that his son had expressed support for ISIS and “was obsessed with Israel.” The father explained how he counseled his son to “Stay calm, be patient, in two years Israel will no longer exist… Russia, China, America too, nobody wants the Jews there.”

How prevalent such “moderation” is in the Muslim world can’t be known. But it, too, is part of the rot that infects immature minds and can fester into violence.

Sympathy is in order for innocent Muslims who are portrayed by dint of their faith alone as potential terrorists. It may be fear that prevents them from speaking out more loudly, engaging in concrete and effective acts to undermine Islamist ideologies and partnering with law enforcement to prevent terrorism. But all that is their moral mandate; the proverbial push has come to shove.

Following the recent knife attack at a London subway station, where the attacker reportedly said “This is for Syria!” before proceeding to stab commuters, a video recorded the voice of an onlooker with an Arabic accent shouting “You ain’t no Muslim, bruv!” several times. The phrase, happily, has been widely seized upon as an expression of how most Muslims feel. And it likely is.

But still, it’s puzzling, and perhaps telling, that the shouter, despite the fame and adulation his words have garnered, has yet to come forward to present himself to the public.