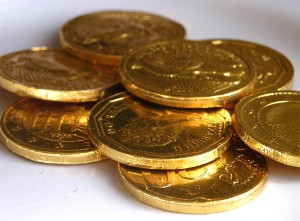 Looking for something to sink your teeth into during Chanukah? Try the halachos of chocolate Chanukah gelt and the history of Jews and chocolate.
Halachic questions are as numerous as chocolate beans in a pod (there are about 40 in each cacao pod). With respect to chocolate coins, there are issues about what to do on Shabbos vis-a-vis eating chocolate coins that have writing on them. In the U.S. this is a double-whammy shailah, because (a) you might be eating (erasing) writing and (b) if the chocolate gelt has “In G-d we trust” on it then this might be an issue of shaimos since you might be erasing the name of Hashem. There is a great deal of room for leniency – see the sources brought by the Kof-K which has a veritable smorgasbord of halachic responsa on their website –The Halachos and Kashrus of Chocolate
The latter is a digest of questions related to gelt and other chocolate questions such as:
• What beracha is made on chocolate gven that cacao grows on trees – she hakol or pri ha-etz? Not so simple
• Is a beracha achrona recited on hot cocoa and is one allowed to drink hot chocolate before davening?
• What beracha is made on chocolate covered products, such as chocolate covered raisins?
• How is a chocolate machine kashered?
• Does bishul akum apply to chocolate?

Chaim Cohen provides some sources in his blog, Dose of Halacha,

Much interesting historical matter on the involvement of Jews in the discovery of chocolate and its dissemination throughout the world is collected by Deborah Prinz in On the Chocolate Trail. In the early 1500s Spanish explorers found Central and South American natives making cacao beans into a chocolate drink. From Spanish Jews (some conversos) it spread to France and the rest of Europe and colonial America. Historical collections of writings and testimony of Conversos were collected by David Gitlitz in his book Secrecy and Deceit: The Religion of the Crypto Jews, and that book can be searched for references to “chocolate.”

It is thought that Jews who were outstanding in the chocolate industry in the 18th and 19th centuries in Europe, started the Chanukah chocolate coin custom. They may have coined the phrase: chocolate Chanukah gelt (=gold). Then into the 20th century we have Loft chocolates who, in the 1920s, produced the now ubiquitous foil-wrapped chocolate coins for Chanukah. Bartons, another Jewish founded and owned chocolate company, then produced not only coins, but little chocolate Maccabees and even latke-shaped chocolates. (The latter didn’t go down well, and slipped into oblivion.) Elite, the Israeli chocolate giant, followed suit along with Carmit and other Israeli manufacturers and today most of those delectable chocolate coins do come from Israel. They are sometimes color coded: gold foil is often milchig, silver foil pareve, but check the label to be sure.
If you want to shell out a little more gelt, you can buy high-end, kosher gourmet chocolates. They run the gamut from coins molded to replicate an actual Judean coin dating back to the 4th decade BCE, airbrushed in gold or silver to chocolates billed as “natural.”
Commemorative metal coins were issued in 1958 by the Bank of Israel for use as Chanukah gelt, bringing us full circle back to the minting of coins by the Hasmoneans. Beware, they are not for noshing. It’s not for nothing that those coins bore the image of the same menorah that appeared on Maccabean coins 2,000 years ago. This brings us to the question: how did Chanukah become connected with coins? That is for another posting.