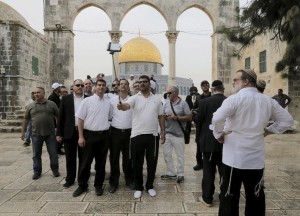 “As if the situation here was not sensitive enough,” groused an incredulous MK Yoel Hasson (Hamachaneh HaTzioni).

He was referring to Israeli Deputy Foreign Minister Tzipi Hotovely’s comment that her “dream is to see the Israeli flag flying over the Temple Mount” and her conviction that Jews should able to pray on Har HaBayis.

Mr. Hasson had harsher words, too, for the minister, ascribing to her “the stubbornness of a donkey” and calling for her dismissal.

Nor was Prime Minister Netanyahu pleased by Ms. Hotovely’s sentiment. He had her cancel a press conference and impressed upon her the need to clarify that she had not been speaking for the government. He also “requested” that Ms. Hotovely inform his office before any public appearance, so that her messages can be “coordinated” with Mr. Netanyahu’s policies.

The Prime Minister’s move was as wise as Ms. Hotolevy’s was foolhardy. Past weeks have shown that bluster about Har HaBayis provides violent Palestinians with a handy pretext to violently vent the hatred they feel for Jews.

In the wake of Yerushalayim’s liberation from Jordan in 1967, Israel instituted a policy giving the Islamic trust known as the Waqf religious control over Har HaBayis, with Israel responsible for the area’s security. That modus vivendi has generally kept the peace at the site.

That policy dovetailed with the halachic psak din at the time of rabbanim from across the spectrum, including Rav Avrohom Yitzchak Kook, zt”l, that ascending the Mount is forbidden.

In 2009 Rav Elyashiv, zt”l, called on Israel’s president to actively prevent Jews from visiting the site, both because of the halachic concerns and because doing so can lead to bloodshed. Rabbi Moshe Sternbuch recently declared that those who ascend the Har “will be held accountable” for resultant Muslim attacks on Jews.

In defiance of that wide consensus, in recent years, increasing numbers of nationalist Jews have made a point of ascending the Mount, and have, as a result, raised the ire of Muslims. According to the Associated Press, approximately 10,000 Jews visited the site last year, compared to 200 or 300 annually a decade ago. And a nationalist group is currently offering to pay $516 to any Jew arrested for praying there.

While any excuse suffices for some Palestinians to try to kill Jews, the “reason” professed by recent murderers and would-be murderers has been their perception that Israel is poised to abrogate the 1967 policy regarding the Har HaBayis. It is a perception unarguably fueled by the actions and words of the “Temple Mount activists.”

Those nationalistic Jews, however, value the rush born of physically asserting that the Har HaBayis is Judaism’s holiest site, over whatever hatred or bloodshed it may evoke from violence-prone Arabs. That respected Torah leaders reject that calculus as corrupt is of no concern to them. They are the “young guard,” and know better.

And they bring to mind the Gemara in Nedarim (40a) about the decision made by the melech Rechavam to shun the advice of the elders of his father Shlomo’s court and heed instead the advice of younger advisors (Melachim Alef, 12): “[What might seem] constructive on the part of the young [can in fact be] destructive; and [what might seem] destructive on the part of elders [can in fact be] constructive.” Rechavam’s wrong choice brought terrible schism to Klal Yisrael, fanning the flames of rebellion.

I don’t doubt the sincerity of the “activists”, only their wisdom – and their bitachon. Yes, as Ms. Hotovely remarked, Har HaBayis is “the holiest place for the Jewish people.” Thus, agitating for a Jewish presence there now might seem a high-minded thing. In truth, though, it betrays a discomfort with our mesorah, which assures us that the Third Beis HaMikdash will appear only when Hashem sees fit.

Jews who are truly secure in their faith feel no compulsion to engage in political acts (much less actions that endanger other Jews) in order to proclaim that Eretz Yisrael is the Jewish land, and Har HaBayis its spiritual center. Those are indisputable facts.

And they are facts impervious to whatever borders temporal states may choose to draw, and whatever structures mortal men may build. Yishmael is just a custodian, stewarding the Har HaBayis for the day – may it come soon – when the Beis HaMikdash will return to it.

That will happen, though, through merits, not machinations.