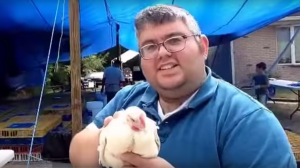 I have to give a great “Yeyasher Kochacha” (colloquially, congratulations, and many more) to my friend Kalman Groner. He was in Lakewood, NJ before Yom Kippur, and happened to go to do kapparos when a group of protesters (largely vegan) showed up.

Not only is there nothing wrong with doing kapparos, there is more than a scent of something ugly about protesting against it in particular. There are a multitude of places which slaughter vastly more animals and with much less concern for humane practices — so what is it that makes Orthodox Jews a convenient target for their protest?

For the most part, chickens used for kapparos are handled gently — swinging one around distresses the bird and risks injuring it (in which case it wouldn’t be Kosher anymore). Kosher slaughter is the most humane form of killing an animal, vastly superior to what goes on in most slaughterhouses even today. And if there is any increase in chicken consumption as a result, it only benefits poor individuals who wouldn’t be able to afford one otherwise.

And Kalman went right over to them, calmly explained all of this — while holding and petting a chicken. He then said that he absolutely welcomes them coming to share their point of view, respectfully — and then points out that if they want to display respect for the views of others in order to try to influence them, it was unusual that they would quote “halacha” and then fail to follow halacha with regards to dress when going into a very traditional community. Why, he wondered, were they needlessly flouting Jewish tradition in a totally unrelated area, if they were honestly trying to influence traditional Jews?

It was all unrehearsed, and he handled it brilliantly. He made a wonderful Kiddush HaShem, Sanctification of G-d’s Name, by defending traditional practices in such a calm and congenial way.