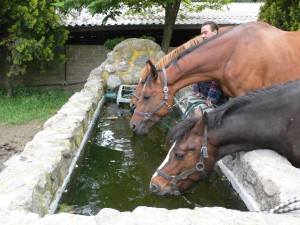 The Rambam’s logic, as always, is unassailable. Miracles, he informs us (Hilchos Yesodei HaTorah, 8:1), simply cannot be bases of belief. What appears to us as miraculous, he explains, could always be trickery or magic. Or, we might add, as per the late science fiction writer Arthur C. Clarke, a “sufficiently advanced technology,” that will always be “indistinguishable from magic.”

To be sure, a miracle can be temporarily impressive, as the Rambam goes on to clarify; and, more important, if sourced in the Divine, can be (like Krias Yam Suf, the be’er and the mann) vivid demonstrations of Hashem’s love and concern for His people. But what lies at the root of Jewish belief, he states, is no miracle, but rather the revelation at Har Sinai, when Klal Yisrael experienced direct communication with the Creator.

The assertion that what appears miraculous cannot in itself prove anything about its source, though, seems frontally challenged by the narrative of the confrontation between the nevi’ei habaal and Eliyahu Hanavi at Har Hacarmel, recounted in Melachim I 18:1-39 (the haftarah of parashas Ki Sisa).

There, we read of how Eliyahu, in order to convince the Jews of the time to stop vacillating between Hashem and a false god, challenged the idolatrous priests to offer, as he would himself, a sacrifice. A heavenly fire that would descend on one of the sacrifices would serve as Divine testimony. Despite efforts of the idolaters to artificially create a “heavenly fire,” as a Midrash describes, and despite Eliyahu’s soaking of his own sacrifice with water, a fire descends from heaven and consumes the Navi’s offering. The people are overwhelmed, and cry out “Hashem, He is G-d! Hashem, He is G-d!”

How, though, to square that account with the Rambam’s words about the limitation of miracles? The answer may lie in a Gemara in Berachos (6a). Eliyahu’s tefillah before the miracle includes the plea Aneini Aneini!– “Answer me! Answer me!” The double entreaty, explains the Gemara, refers to two separate requests, to “cause a fire to come down from heaven” and to “let not the people say that it was the result of magic!”

And, in fact, the conviction to which the people gave voice when the fire descended did not prove lasting. Soon thereafter, Eliyahu despairs at the nation’s slipping back into its wrong ways. Their inspiration at Har HaCarmel was powerful but, in the end, ephemeral. It was based, after all, on a mere miracle.

The declaration “Hashem, He is G-d!”, of course, is what we call out seven times at Ne’ilah, at the very close of Yom Kippur. How odd that a declaration that turned out to be short-lived should conclude our holiest day.

Could it be a subtle warning? A reminder that “spiritual highs” cannot in themselves ensure their own perseverance, that even a state of deep emotion requires “follow-up” determination if it is to be maintained?

The first opportunity to follow up, so to speak, after Ne’ilah is the Maariv that ensues after the thunderous “Hashem Hu HaElokim!”s. A kehillah that davens that first post-Yom Kippur tefillah meticulously and with kavanah is one that has had a successful day.

You may know the story told of the Baal Shem Tov’s horses. The two animals were hitched up to the Besht’s wagon for a trip, but were unaware of the kefitzas haderech, or miraculous “shortening of the way,” that would take place on their journey. When only a few minutes had elapsed as they passed a point that should have taken them a full day to reach, one horse said to the other, “Hmmm. I’m not even hungry. We must not be horses but men!”

Then, when a second landmark unexpectedly went by, the other horse commented, “No, we’re even more than men. We must be angels!” And so the horses proudly trotted on, until they reached their destination ten hours – but many days’ journey – away. By this point, they were famished and, led to a feeding trough, enthusiastically dug in to sate their hunger.

And so, the story ends, it was then that the horses knew, without any doubt, that they were horses.

On Yom Kippur, we withdraw from human activities and stand like angels. When the day ends, though, tired and hungry, we know we are mere humans.

But, if we manage to carry our Ne’ilah recognition into Maariv and beyond, better ones.