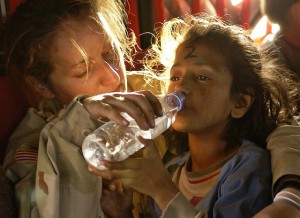 Accusatory fingers point all over during this season, and some are properly pointed at me. In this season of cheshbon hanefesh, many of us, myself included, spend too much time with the news. While, for better of for worse, most of us will likely not give up the pursuit altogether, we should learn from Rabbi Berel Wein’s description of one of his early rabbeim. He taught us, said Rabbi Wein, how to learn a newspaper. The Torah personality finds lessons of worth that he can learn from the events around him – insights into the human spirit, and into Divine Providence. The daily broadsheet (ob”m) can become a mussar sefer.

Patheos’ able executive editor challenged me a short while ago to come up with something about the Yomim Nora’im for the general public. “Every year the world seems to be confronted with some new, unbearable challenge, and every year these spiritual markers remind us of the sovereignty and providence of G-d. Any chance something special in the events of the last year has created some intersection of divinity and humanity that you’d like to elaborate on for us?”

It took but an instant to recall the images that most seared my memory of the previous year: the blood-soaked pages of siddurim from the Har Nof massacre; the crowds running through the streets of several European capitals, shouting “Death to the Jews.”

Almost instantly, however, I realized that those images did not match my editor’s requirements. Horrific as they were, there was no insight about divinity or humanity in them. We’ve been there before – for over two thousand years. The faces of the rabid haters are all too familiar. And so is Hashem’s habit of allowing us to outlive our oppressors.

I gave the matter considerable thought, and banged out an essay. Parts of it, in slightly tweaked form, might be of interest to Cross-Currents readers, especially since they are based on the words of the Slonimer Rebbe, zt”l..

The images I chose were those of the hundreds of thousands intent on fleeing the chaos of the Middle East – on foot, if necessary – to begin a new life in Europe.

These images place in sharp focus the lengths that people will go to improve their lot, especially when they find the status quo untenable. In these pictures we realize that when people have an opportunity to escape a life that is no life, they will cross seas and walk across continents for even a remote chance of improving their conditions.

Each year, G-d gives us the opportunity to vastly improve our connection with Him through repentance during this season whose whole purpose is to inspire our return to Him. It is within our power to close the distance that our transgressions opened up between our Creator and ourselves. We can change the spiritual parameters of our existence for the better, and do so from the comfort of our homes. We don’t have to subject myself to human traffickers or the elements or an uncertain future. All we need to do is recognize the folly of our ways, feel remorse, and meaningfully resolve not to repeat our mistakes. If the Middle Eastern migrants go to such great lengths to better themselves, why can’t we?

Perhaps because we run from obligations we cannot adequately discharge. We feel so much shame for repeated offenses, and so much obligation for His patience with us despite those trespasses, that we are overwhelmed. Easier, like Yonah, to flee from His presence.

Yet where should we go? Here again, the images of the Syrians and Iraqis are instructive. Unlike some of our parents and grandparents who tried to flee Hitler’s Germany and had no idea of where to go, many of these refugees are seen pushing their way past borders and obstacles, shouting “Merkel, Merkel!” They do not know exactly how they will get there, but they know that they want to get to Germany!

Why do we not find our destination with the same focus and resolve? Here is a paraphrase from Nesivos Shalom:

We might think of shrinking away, of drawing back from the Power of His Presence. A better strategy would be to seek refuge, to find a place of safety. For believers, not only is there such a place, but we are all familiar with its address. We escape not by running away, but by rushing headlong directly into Him. We submerge our smallness into His greatness. We negate our own importance, and reach out to cling to Him. By negating ourselves, He moves within range. Self-negation is the key to achieving deveikus – firmly attaching ourselves and clinging to Him . (The Torah alludes to this in its description of the Yom Kippur avodah in the Kodesh HaKodashim. “No person shall be in the Tent of Meeting when he comes to provide atonement in the Sanctuary.” At this moment of encounter with the Divine, one ceases to be a person.)

A beautiful thought, but we think ourselves incapable of acting on it. We regard ourselves as too flawed, too stained by our misdeeds to aspire to such greatness. So we are frozen into inaction. An earlier work from Beis Slonim, Beis Avrohom, offers a parable to help overcome this paralysis. A lowly soldier stands in wait, part of the honor guard along the route that the king is expected to travel. The king’s arrival is significantly delayed. Being a hot day, the soldier uses the extra time to freshen up. He sheds his clothes, and takes a dip in the river. Unexpectedly, he hears the approach of the king’s entourage, approaching quite rapidly. This plunges him into a state of confusion and doubt. Hardly in a state to receive the king, he considers perhaps hiding himself. On the other hand, his job calls for him being on hand to honor the king.

He decides that he simply cannot lose the opportunity to receive the king, and stands naked and exposed at his post. While others are horrified, the king discerns that his subject’s behavior proves that he regards the honor of the king more importantly than his own shame and embarrassment. Instead of punishing him as his advisors, aghast at the bizarre sight, suggest, he bestows a medal upon the soldier for his devotion.

This is our job exactly – to present ourselves before the King on the Yomim Nora’im. Despite seeing ourselves as naked and exposed, we must nonetheless participate in the annual reenactment of His coronation. With so many today mocking belief and strong faith, our assertion of His kingship could not be more important.

We are all refugees, and yet we know where we should be going. Unlike the migrants in Europe, we are assured of a warm welcome at our destination, if we exercise the courage to make the trip.