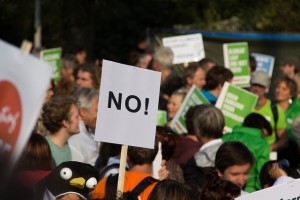 Do you agree with Rabbi Goldin when he says: “This isn’t a democracy, it’s a halachic process… The power to make decisions has always been in the hands of the few who spend their lives steeped in its wells.”

I disagree with him. I think that the Torah belongs to all of us and the sources are there for all of us to study and learn. The very essence of the Talmud and Beit Modrash (sic) is exactly the opposite of what R Goldin is saying. The Torah doesn’t belong to a couple of rabbis in a back room who come out with papal like pronouncements and do not share their sources or the content of their reasoning. This is exactly what Rashi says on this week’s parashah (devarim 29:3). This is why the Torah was written on large stones and in 70 languages. It is precisely to counteract R Goldin’s elitist approach to Torah. The Torah belongs to all of us.

The above statement of Rabbi Shmuel Herzfeld reminds one of the words of Rav Soloveitchik zt”l:

Korach rebelled against authority. All Jews are equal. Hence, everyone is entitled to interpret the law… The study of the law, Korach argued, is an exoteric act, a democratic act, in which every intelligent person may engage. Moshe’s claim to being the exclusive legal authority, and the exclusive interpreter of the law, Korach argued, was unfounded and unwarranted.  (1973 shiur at RCA convention; The Rav: Thinking Aloud – Sefer Bamidbar, pp. 127-148)

While I do not want to get into the substance of the controversy regarding International Beit Din (IBD) and the letter of opposition by Rav Schachter and leading poskim (please click here for an English translation), both due to my long-time respectful relationship with a former member of IBD as well as due to the fact that such a discussion should obviously be within the exclusive purview of gedolei ha-poskim/top-tier halachic authorities, the approach of Rabbi Herzfeld and many others supporting IBD leaves much to be desired, and they perform a disservice to whatever merit the IBD could claim, as they engage in non-halachic, populist reasoning and harangues, as if Halacha is an open-ended system that can be determined by public opinion, popular referendum and preying on people’s sympathy.

We are also informed by Rabbi Lopatin that a letter of petition signed by 100 rabbis shall soon be issued to support IBD:

I, too, am one of the over 100 North American, Israeli and European rabbis who have signed the letter supporting Rav Krauss’s Beit Din. Among them are leaders of Beit Hillel and the venerated Rabbi Dr. Nathan Lopes Cardozo. The list is still in formation but please contact Rav Zach Truboff if you an Orthodox rabbi or clergy interested in supporting Rav Krauss and show the Agunot that you will stand by them when they are freed by a Beit Din such as his.

And, Rabbi Shmuly Yanklowitz chimes in:

I am one of the 100 Orthodox rabbis mentioned here that is standing in solidarity with this new beit din enabling immediate & responsible responses to the agunah crisis (releasing women from chained marriages). How can we stop the bullying from those fighting these efforts?

I am sorry, but letters of petition signed by people who are not preeminent poskim, be they one hundred, one thousand or one million in number, do not determine Halacha. Such an approach represents a frightening and dangerous misunderstanding of the entire halachic enterprise.

Rav Schachter’s strong support of ORA, in the face of formidable opposition, is a testament to his immense concern for agunos. (I am not expressing a position on ORA; I am merely making an observation.) Rav Schachter’s commitment to ORA, well known to the aforementioned detractors, brings into question the sincerity of their arguments and should make one think twice before considering their rhetoric.